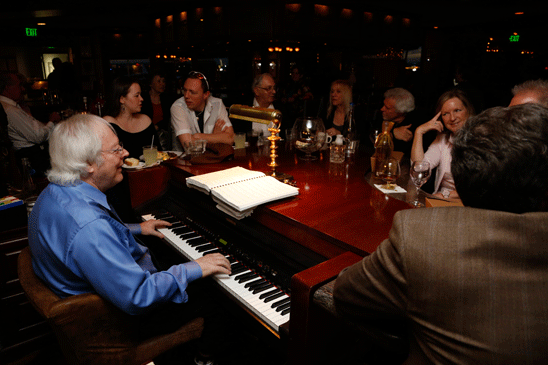 Boogie Bob studied piano with Gladys Kendall in Denver for eight years. He continued his studies at Colorado State College and the University of Denver. He started playing professionally in 1960 at a coffee house called the Village located at 14th and Ogden in Denver. He also at this time was writing music, playing in bands, teaching private piano lessons, doing solo piano and studio recording work. In the 70’s he was doing studio work with Michael Stanley, Joe Walsh, Albert Collins, Rob Wallace, Pete McCabe and Rob Kunkel. He moved to southern California in 1973 and with Rob Kunkel formed two bands, the RKO Trio and an experimental group, Pataphysics. In 1976 he moved back to Denver and joined the Rocky Starr show, a country group. In the summer of 1978 his friend, Rob Wallace, got him started on a solo career again as “Boogie” Bob Olson, playing at the Teller House in Central city. In 1979 he released his first solo album, “Boogie Bob Live at the Teller House.” Boogie has played the past 23 years at two piano bars. He played at Ikaros from 1983 to 1996 and at the Aurora Summit from 1996 to 2007 On October 30, 2007 he started a new job at the Perfect Landing playing Tuesday through Saturday from 5:30 till 9:00PM He continues to play, write, record and teach music. He plays all styles of music including classical, blues, jazz, ragtime, rock, boogie, ballads, show tunes, and movie themes. His compositions include this same wide variety of music and are featured on his 10 solo CD’s, 7 CD’s with others and his new DVD, with life long friend, Robb Mayfield, released in 2006. He can be reached at boogiebob@comcast.netm.